Boldic Award 2014
The Cermony for the Boldic Award winner Norwegian digital learning arena. NDLA was held at the Autumn Conference the 23th of October in Stockholm at the conference called ”The change in learning forms” 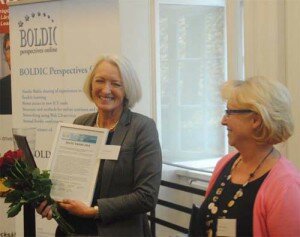 Liv Heidrun Heskestad from Bergen Norway received the prize at the SVERD Autumn venue in Stockholm.

The Boldic project are financed by support from Nordplus and the  Nordic Council of Ministers and Nordplus see link http://boldic.org

See Video from the Boldic Award 2014 Cermony for  NDLA